on December 21, 2016
This year, instead of sending Christmas cards, we offered the opportunity for our community members to make a donation of money, equivalent to what they would usually spend on cards.  Along with their donation they were asked to write the name of their favorite charity, along with their own name, on a slip of paper that went in the same tin with their donation.  At our last Revive session, we selected the charity, raffle style.  The charity chosen, suggested by Sylvia, was The Bark Foundation.

David and Joy, who live in our own community in Birstall Leicester, have worked exceptionally hard to raise funds to build the HOTPEC orphanage in Cameroon.  Their current fundraising is focussed on secondary education and also higher education.

The photograph attached shows a young man (with some of his younger friends)  He has been at the orphanage since he was the age of one and recently graduated having been awarded a degree in nursing.  His name is Bruceline and he was funded by The Bark Foundation. 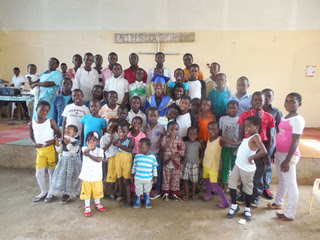 The funds we raised from our charity instead of cards collection was £26.  Joy told me that this would buy 3 children, at the orphanage, 2 pairs of shoes for the next year ahead.