A while ago a lady attending my crochet workshop told me a story about how prostitutes, in New Orleans, used to crochet edgings to embellish their clothing and make themselves more attractive. As a result, they became known as 'hookers'.  Of course being one for loving a story like this, I repeated this anecdote, on many occasions, to people that I have taught.  I wanted to find out if this story was true so have spent a while doing a bit of research and so far I have not found anything about the New Orleans 'hookers' but I did find references to Joseph Hooker a Major General (1814-79) during the Civil War in America.  Seemingly Hooker's troops were poorly disciplined and famous for fraternizing with the "working girls" of the day, in some accounts a practice tolerated by Hooker to the extent of allowing prostitutes to set up shop in the troopers' barracks.
Another theory is, that it is based on the slang term "to hook," which back then meant "to entice or swindle." An 1850 magazine illustration, for instance, titled "Hooking A Victim" shows ladies of the night, in hoop skirts no less, plying their trade at Broadway and Canal Streets in New York City.

Anyway, I rather like the idea of the first one, that it was a term used for embellishing items of clothing which is a little project I did this weekend.
This skirt was found in a charity shop but had a bit of a knee flair to it that I didn't like so off it was chopped to create a shorter version. 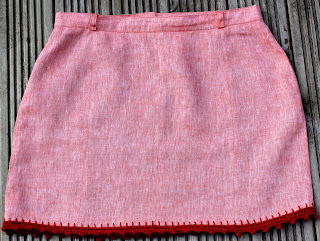 Next I did a blanket stitch to the lower edge marking equal spaces as I went along.  With this blanket stitch edging in place you can crochet easily around the bottom.  Into each of the spaces created by the blanket stitch I did 2 double crochet joining with a slip stitch at the end of the round.  I did a second round of double crochet adding in a simple fancy edging by doing a chain of 3 and slip stitching into the first chain to give it a picot edging. 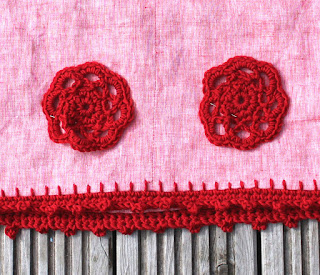 I am fairly pleased with the outcome but I think I may embellish it further.  Am not sure I will wear it with bare legs, mine are worse for wear these days, but it looks great over a pair of jeans!