on May 28, 2012
A little while ago I was asked if I would have a go at crocheting a bra for two lovely ladies who had registered to do the London 2012 Moonwalk also known as 'Walk the Walk', it started 15 yrs ago in New York when 13 women decided to walk the New York marathon in their bras to raise money for breast cancer awareness.  Since then over £75m has been raised.  My mum had breast cancer and died from complications associated with treatment so, I jumped at the chance of being able to do something for these ladies and maybe help to raise awareness of this wonderful cause. 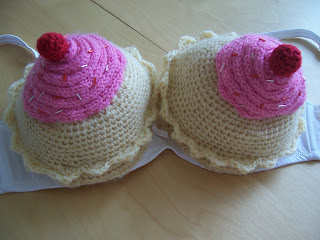 They are supposed to be cupcake cups but they kind of turned out slight Maddonna - ish but the girls were delighted nontheless and, apparently, they caused a bit of a stir.  I used a DK yarn and crocheted the cake bit 'freestyle' and the pink icing was made from the tail created by a french knitting dolly and embellished with red crochet for the cherries and red and silver sequins for the sprinkles.  Don't ask me for the pattern because it's resides in my head!

So if you fancy a bit of a Moonwalk yourself in 2013 or just want to look at some of the amazing pictures from the night clicky right here!